Testimonials from Gerald Lefebvre, Law Office of Gerald Lefebvre. Gerald A. Lefebvre is a Board Certified Civil Trial Lawyer approved by the Florida Bar. He is also Board Certified in Civil Trial Advocacy approved by the National Board of Trial Advocacy. In addition to the highest rating of AV Preeminent* from Martindale-Hubbell, he has received top Avvo ratings and is a lifetime member of the Million Dollar Advocates Forum and the Multi-Million Dollar Advocates Forum. Selected to Super Lawyers: 2007, 2009, 2011, 2014 – 2016

Back in 1996-1997, Robert W Hamilton Jr. was hired as a private investigator by Linnes Finney, Jr. to work on a personal injury case. Mr. Finney, Jr. proposed Mr. Hamilton, Jr. to produce a settlement documentary. Thank you, Linnes Finney, Jr. for the testimonials! Linnes Finney, Jr. is a Florida Bar Board Certified Civil Trial Lawyer. He is a Top Rated Personal Injury Attorney in Port St. Lucie, FL., and he has been selected to Super Lawyers: 2008 – 2011, 2013-2016.

Thank you very much, Brown Robert, LLP, for the testimonials! 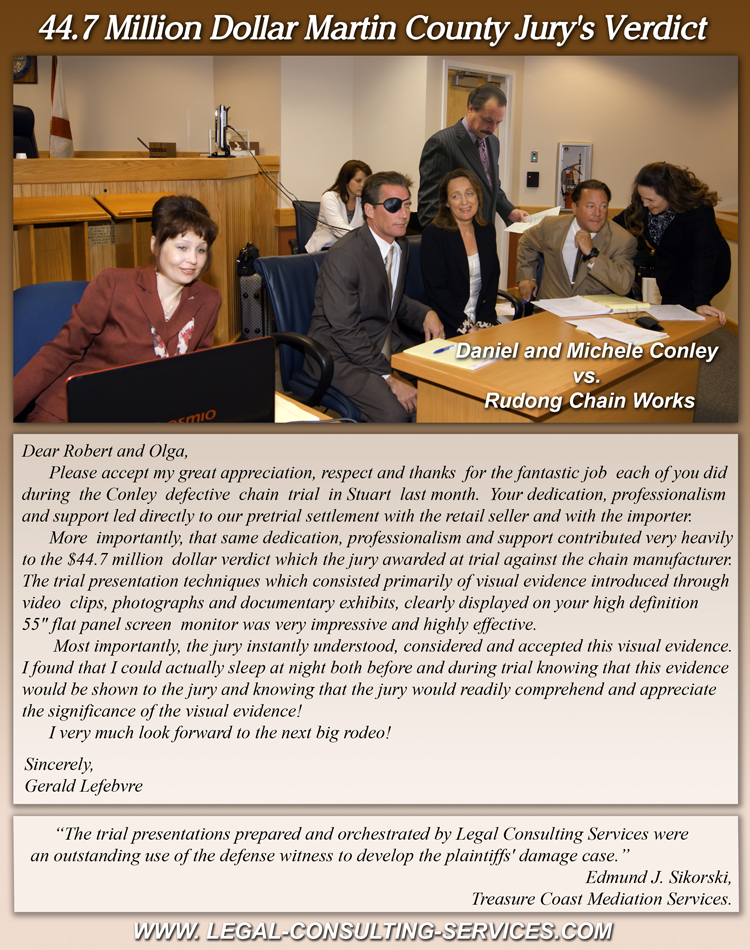 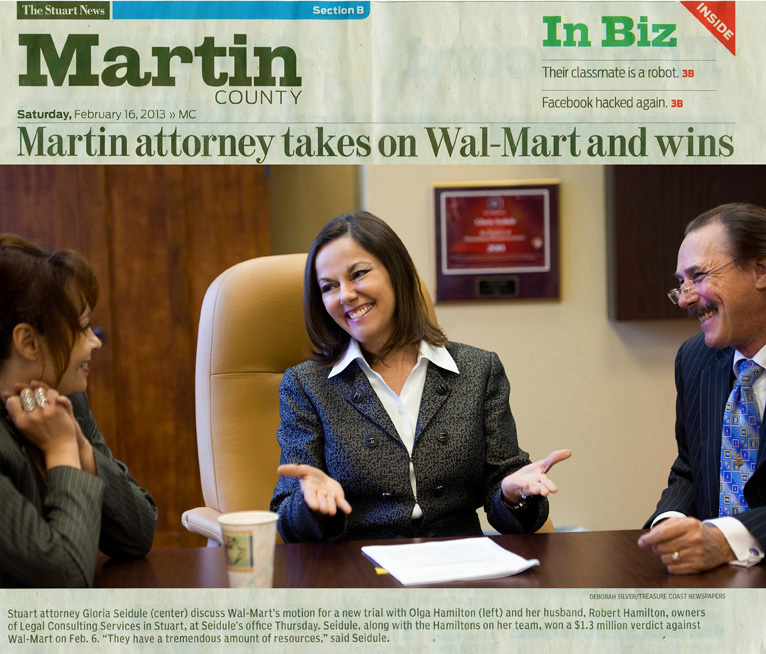 Stuart Personal Injury Attorney Gloria Seidule won a $1,287,144 verdict against Wal-Mart in a negligent maintenance and assembly case on February 6, 2013. The verdict was awarded by an all female, St. Lucie County jury in front of Circuit Court Judge Dwight Geiger. After four hours of deliberation, the jury found Wal-Mart 90% at fault for the severe injuries of its customer. They determined that Wal-Mart negligently assembled and maintained a Gatorade sign that had fallen to the floor causing Tom Papakalodoukas, age 41, to violently fall to the ground tearing his biceps tendon in his right dominant arm.

The evidence showed Wal-Mart discarded the display sign after the fall even though it knew from store surveillance the display was the reason the sign fell. Wal-Mart then defended the case claiming the display had been properly assembled and maintained. Wal-Mart blamed Gatorade for providing plastic screws that could have easily broken when attached to the sign display.

Attorney Gloria Seidule countered Wal-Mart’s defense by presenting evidence, provided by the national Gatorade headquarters in Dallas, Texas, that if assembled properly, in accordance with Gatorade directions, the sign could not have fallen to the ground. If the screws had become broken or loose, it was Wal-Mart’s duty to maintain the sign to ensure the safety of their customers.
Due to Wal-Mart’s failure to preserve the Gatorade display, the Court instructed the jury that it could infer negligence if it found the incident would not normally happen absent negligence and the display was in the exclusive control of Wal-Mart.

Mr. Papakalodoukas endured three major surgeries in two years due to the severity of his injuries. During the final surgery, doctors inserted a cadaver Achilles Tendon into his arm to assist in restoring strength and optimal function. Mr. Papakalodoukas has been left with a lifelong defect called a popeye deformity, which is a malformed right bulging bicep tendon that creates abnormal bulges on his arm. Due to this fact, he has not been able to return to his former work as a beverage distribution manager.He also suffers from depression partly triggered by anxieties about his future and his health. He did not have health insurance at the time of his fall and has accrued over $200,000 in unpaid medical bills.
Wal-Mart failed to keep the store safe for its customers. The jury listened carefully to the evidence and gave a fair and impartial verdict,comments Seidule.The jury assessed the existing and future medical expenses and lost wages when determining the monetary value of the case.The jury verdict represents justice for all Florida citizens. 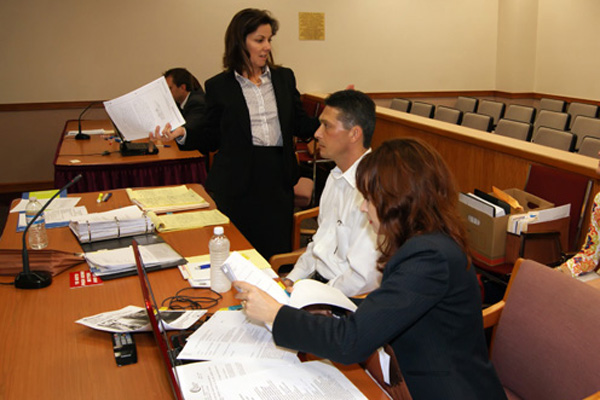 Robert W. Hamilton, Jr of Legal Consulting Services, Inc., provided Trial and Jury Consulting in collaboration with the professional skills of Olga Hamilton who orchestrated the trial production management during the proceedings. 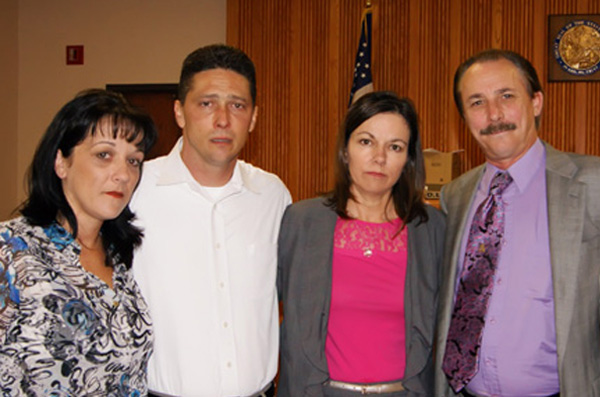